Ganesh Chaturthi is around the corner and preparation for Patri Pujan has started too! Have a look at these 21 Leaves Used for Ganesh Puja in India!

Ganesh Chaturthi calls for the auspicious Ekavimshathi or Patri Pujan. Hindu scriptures describe a special significance of worshipping Ganpati with different leaves while reciting corresponding mantras. Ganpati or Vighnharta eliminates all the obstacles from the devotee’s life and offering these leaves in puja holds a lot of significance. Have a look at the Leaves Used for Ganesh Puja in India!

Check out our article on Parijat leaves benefits here

As per the mythology, Ganpati once swallowed a demon and ended up with a burning sensation in the stomach. Hence, some sages offered him a set of doobs to relieve his pain. It is one of the most popular leaves for background ganpati decoration. 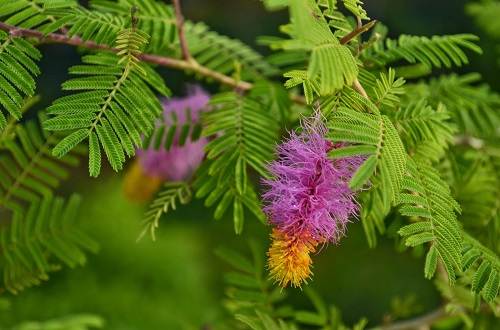 A true devotee never forgets to offer Shami leaves to Ganpati. According to Hindu scriptures, many Hindu deities reside in this leaf, and offering it with Om Sumukhay Namah chant reduces one’s suffering. If you have a ganesh mandir at home, keep these leaves there. 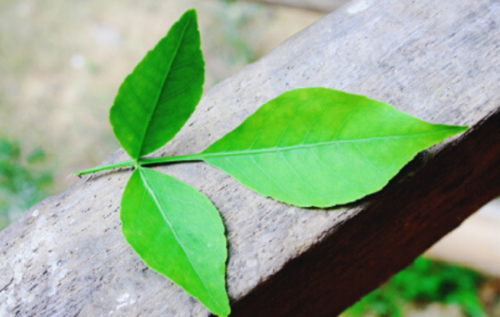 Not just the flower, but the leaves are also an essential part of Ganesh puja. Datura leaves are toxic but also effective in treating poisonous bites and arthritis. 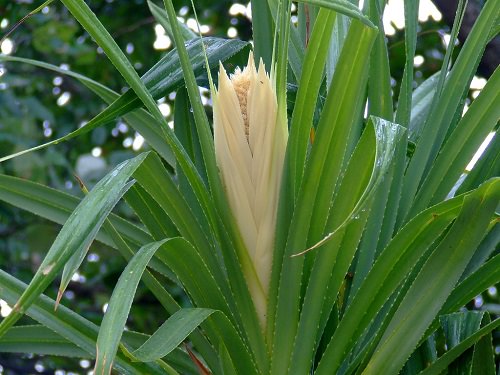 Kewada is an integral part of the set of 21 leaves for Ganesh worshipping. Its fragrant leaves are blue-green in color and appear in a rosette pattern. Keep these leaves around ganesh mandir at home. 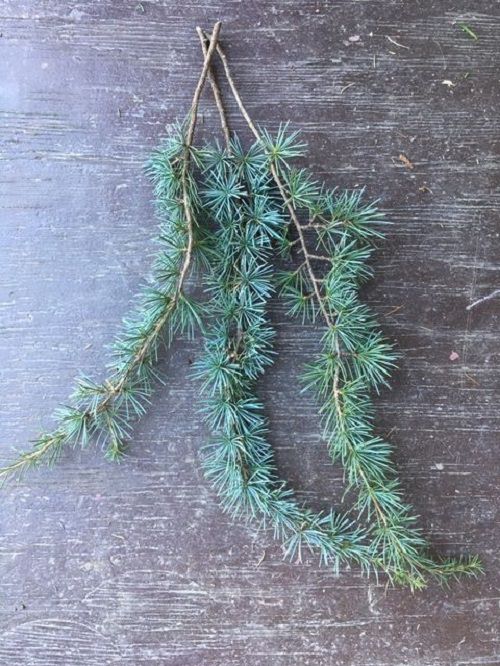 Devdar refers to the Sanskrit word deity, and the tree itself is worshipped as a divine tree. The leaves of this evergreen tree are needle-like and complement in ‘Poojaptri’ ritual. You can also decorate the ganpati murti with it. 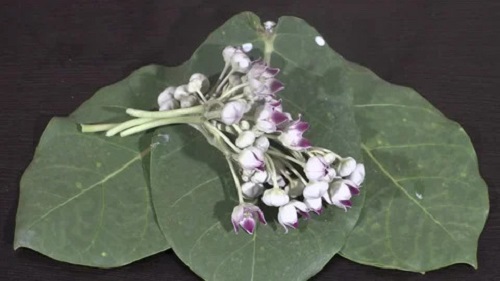 Apart from flowers, the ovate leaves are also offered in worship. Also, the aak roots are made into the Ganesh idol, which is known as Shwetark Ganpati. 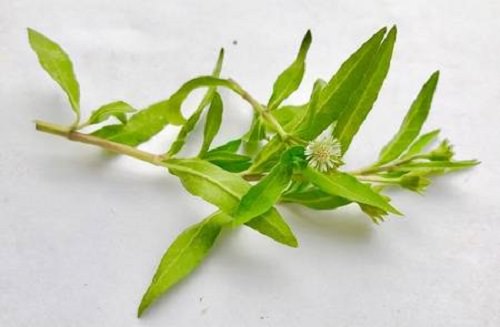 Offering Bhringraj with Ghanadishya Namah chanting is auspicious. The lance-shaped leaves are arranged in opposite pairs and considered a boon in Ayurveda for hair loss. If you have a ganpati mandir at home, do keep these leaves there. 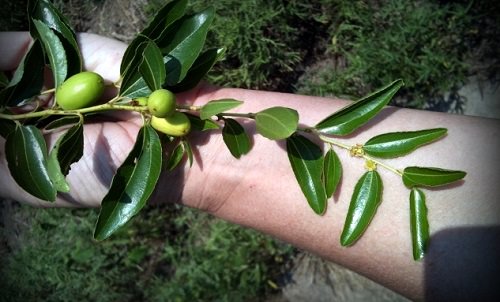 Include ummetta or ber leaves in puja to obtain Ganesha’s blessings. Thanks to its umpteen medicinal properties, it is also used to reduce gastric acid and ulcers in Ayurveda.

Agati leaves are green and pinnate, and including them in Ganpati Patri puja invites prosperity in one’s life. The leaves also find culinary uses and provide relief in arthritis.

Banana plantain, famous as ‘Kala Bou,’ is placed on the right side of Ganesh in Bengal. Legends say it is depicted and worshipped as the mother of Ganesh, ‘Durga’. You can also use it for background ganpati decoration.

It is offered to Ganesha with ‘Om Ekdantaya Namah-Chuta Patram Samarpayami‘ chant. Also, the Mandap and Kalash are decorated with mango leaves during the auspicious Hindu functions. 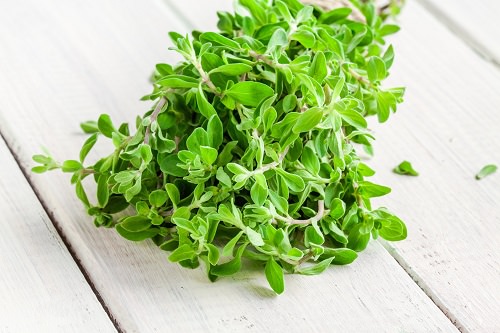 Famous for its essential oil, the scented Marua leaves are an important offering to the Lord Ganesha. During Patri pujan, recite ‘Phalachndraaaya Namah’ and offer the leaves. Keep it in the ganpati mandir at your home.

Sindoor patra is very dear to Siddhivinayak, so a true devotee should offer its leaves with Herambay Namah hymn. Its glossy green leaves are ovate with tapering ends. 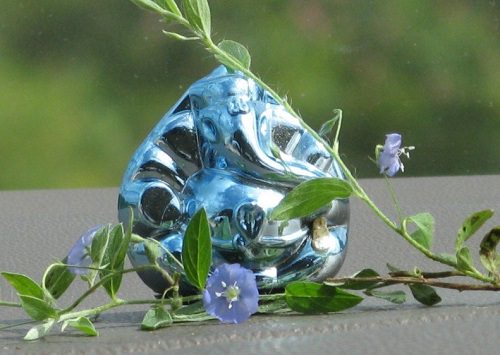 Since Ashtvinayak is very fond of Vishnukrantha leaves, you can offer its leaves while chanting ‘Om UmaPatray Namah‘. Its leaves are Lanceolate and covered with silky thin hair.

Apart from its scented flowers, the leaves of jasmine also please Vinayak. So, you can offer it in 21 Patri Puja ritual, or use them in the ganpati mandir. 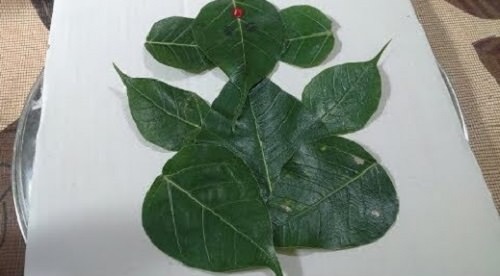 The heart-shaped leaves of peepal appease Gajanan very much. Offer it with Om Vinayakaya Namah-Ashvattha Patram Samarpayami chant. You can also prepare eco-friendly Ganesha with these leaves. It can also be used for background ganpati decoration. 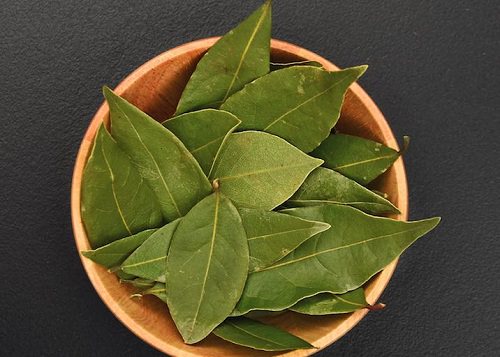 Everyone is aware of bay leaf, thanks to its culinary uses as a spice. But, they play a vital role in patri puja also and offered with Chaturhotre Namah chanting around the ganpati mandir.

Note: Although tulsi/basil is the most sacred plant in Hindu, according to the mythology tulsi should not be offered in Patri Pujan.